Either way, Postman Pat doesn’t distinguish when he’s delivering the post – providing of course we hit certain dates. And those dates this year are as follows:

This means that all UK-only calendar orders received before noon on Thursday 20th will be shipped out First Class Post (P&P included) within the £12.99 calendar tag price and should arrive before the big day.

All UKcalendar orders received after noon on Thursday 20th and on Friday 21st will be posted via Special Delivery Next Day service for an additional charge of £4.00.

All orders received after noon on Saturday 22nd will be shipped to arrive post Xmas at the standard rates, ie P&P included for allUK deliveries, £1 intoEurope and £2 Rest of World…

Time to get cracking then. Oh, and by the way, here’s a shot of one of my local post boxes from a couple of years back when we had a monster dump of snow right before Xmas. Pretty ain’t it? 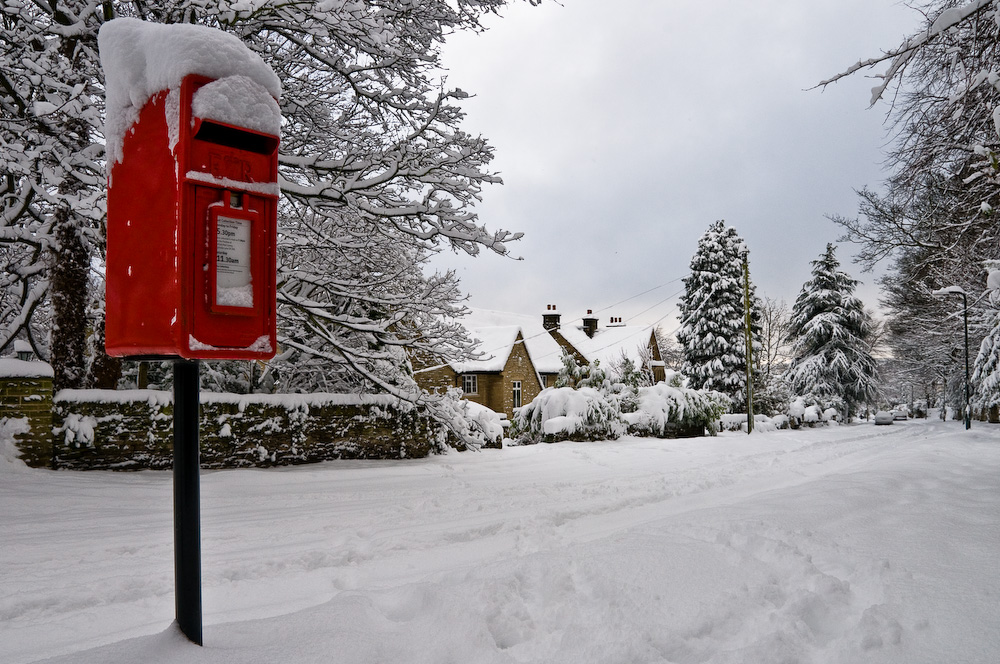 Nov 22nd: And now for something completely different…

Fancy trying something different this weekend? If you’ve always had a secret hankering to give drytooling a go but never had the opportunity then you can this weekend if you get along to White Goods…

Drytooling is kinda ice climbing without the ice! Sounds silly egh, well there is a serious side to it too as you’d appreciate if you’re on a mixed pitch and the ice runs out and you’re faced with rock. That’s where drytooling comes in. There is a whole new technique and vocabulary to learn too.

It fun, its technical and it at White Goods this weekend and ace climber Ramon Marin is involved so you’ll get a wicked workout if nothing else! I photographed Ramon doing Stump Man at White Goods for my climbing calendar. Stump Man is M11 which roughly translates to bl**dly hard and not surprisingly it’s one of the hardest drytooling pitches in the UK.

But don’t take this from me – get along to White Goods and listen to the mistro himself. White Goods is the place this weekend. The poster for the event is below – using the pix from the calendar of course. Check it out here first though… http://whitegood.blogspot.co.uk/ 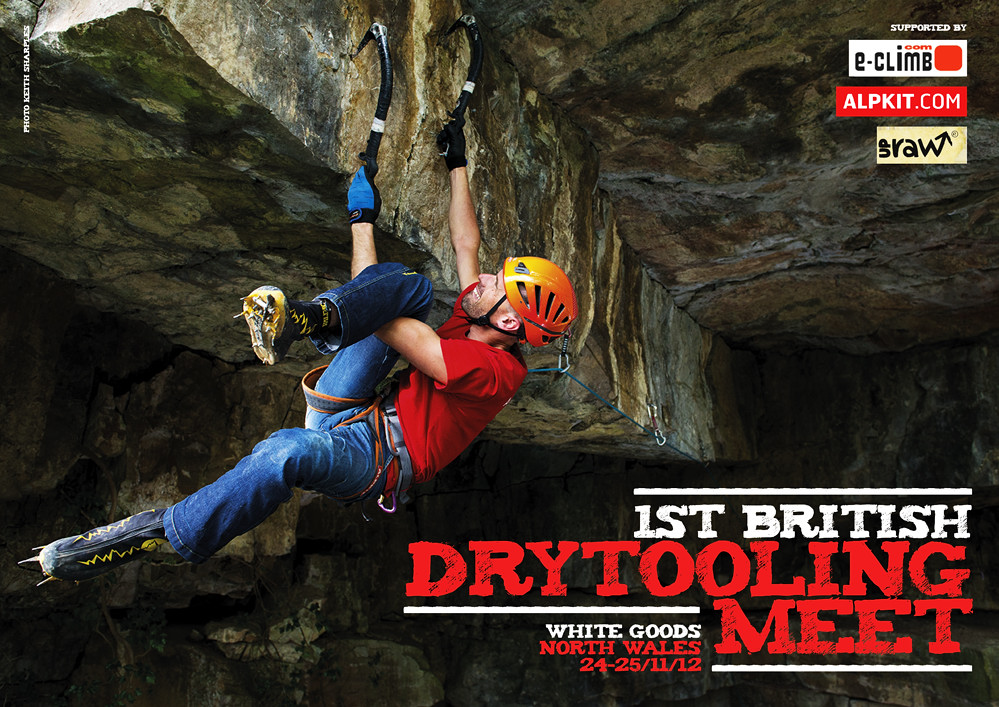 Belay Bunny Turned Bad, a.k.a. Becky Lounds was the winner and she brought Tim, her husband, along for the photo shoot in Llanberis Pass.

Also posted in Be in My Calendar Competition, Photography

Yep it’s official, Climbing 2013 – my 9th climbing calendar – was back from the printers mid last week and is now shipping…

As I said in an earlier blog about the calendar, this year feels like it’s been something of a long haul on account of the lousy weather. However, seeing all the calendar boxes piled up is definitely exciting, finally all that effort has produced tangible results. As an aside, not only do the calendars physically occupy a surprising amount of space but they also have something of a pungent smell! Bundling them into packages and shipping them out is a tactile and a cathartic experience – the final leg of the long haul.

I’ll include a link to the calendar images and pages later in this post but I’d like to give you the full griff first. I was really pleased with the redesign for last year’s calendar but, as with many things, further modifications come to hand during the year. Firstly, I’ve gone with a snazzy glossy laminate on the cover on Climbing 2013. Secondly, I‘ve shot landscape images only – as opposed to a mix of landscape and portrait – this year and during the pre-press work in the design studio we figured that they just begged to be run with full bleed, ie no border. And whilst I’m talking about images, the bulk of them have been shot on my new D800 and I think that the increased dynamic range and resolution of Nikon’s flagship hi res DSLR has given a noticeable boost in the image quality. To complement the images I’ve included longer captions again. And finally, the date grids have been re-gigged so that the weeks run Monday to Sunday so that plans for the all-important weekends can be kept together. All small mods for sure, but important ones nevertheless which I think have given Climbing 2013 a real boost. 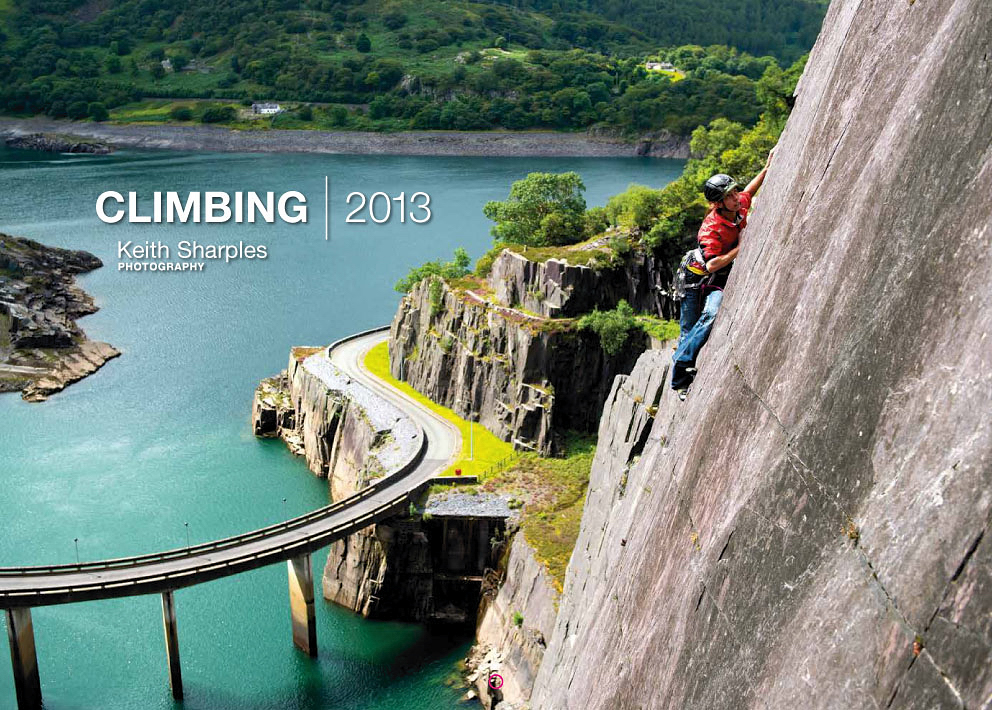 The aforementioned lousy weather played havoc with my intended photographic coverage but I’ve tried to stay as true as possible to the usual and deliberately eclectic mix of venues, routes, climbers and rock types. Once again the ‘Be in my Calendar’ competition winner, who this year is Becky Lounds, headlines on the front cover of Climbing 2013 climbing Pull My Daisy (E2 5c). Becky also features climbing German Schoolgirl (E2 5c) in March. Both are in the Rainbow Slab area in Llanberis slate quarries, Snowdonia. As usual, Climbing 2013 features plenty of grit action with shots of the uber classic that is Eastwood Traverse as well as Brimstone at Millstone and Goliath at Burbage South. Limestone action isn’t ignored either – that would have been rude – so Raven Tor, Two Tier – Chee Dale and Kilnsey complete the role-call from the Pennines.

Further up north, as they say, the Lake District is well-represented with shots at Little Font in Kentmere and Bowderstone Crag. Off the beaten track shots – as it were – come in from the Blueies (ie Blue Mountains) down-under in Oz, Dry-Tooling in North Wales and British Bouldering action from Cliffhanger.

So as I said – Climbing 2013 is now shipping and copies will be winging their way to climbing walls/shops across the county forthwith. However, if you want you copy direct from the calendar stash in KSP HQ then you can order your copy – postage and packaging included – from the KSP e-shop right here. And if you want copies of the Climbing 2013 Year Planner/Poster then you can get them from the KSP e-shop too.

Finally, to see the images in Climbing 2013 click here or to see the pages click through here…

After an age off radar, I’m back on-line to get the blog up to date with what the heck has been going on over the summer monsoon season. Well apart from holidays, new arrivals at Chez Sharples and lots of photo-missions, Climbing 2013 is what’s been going on. Yes folks, calendar #9 is in the bag and away at the designers…

It was all going super smoothly – back in January. One month into the new year and two shots in the can. Feb gave way into March and the sun hit and it was climb o’clock. Trouble was, the weather then took control and things went south – fast! Wet crags, injured climbers – not the stuff of dreams.

Long story short; the pixs for Calendar #9 are now done and TBH I’m getting a good vibe about them too. I’ll have the first proofs early this week, then with a bit of luck the printer proofs the week after then the finished article the week after. Fingers crossed.

So, I guess you wanna see some shots right? Sure; but not just yet. Here’s a mini gallery of action all snapped as I romped the country shooting for the calendar… 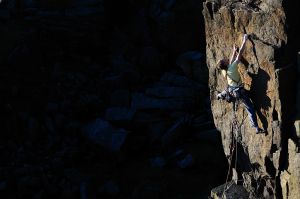 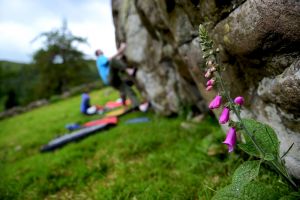 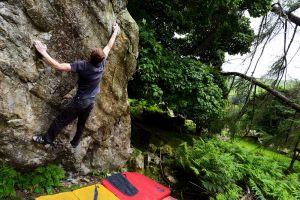 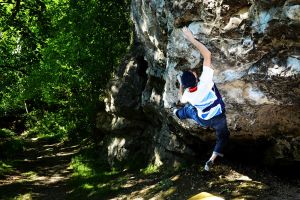 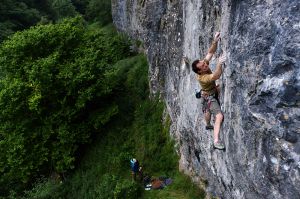 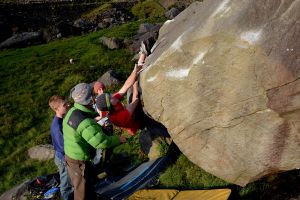 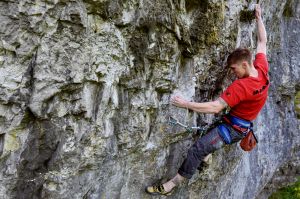 There’s now less than 24hours left to enter the ‘Be in My 2013 Calendar Competition’ so if you fancy being in with a chance at a money can’t buy prize then you’d better be flippin’ quick!

If you’re not familiar with the competition, UKClimbing, alongside some of the biggest names in the UK climbing business, are sponsoring a page in my UK-centric climbing calendar, Climbing:2013, and I’m looking for a keen climber to be photographed in a special photo shoot for the UKC page. It is a prize that, as copy writers would say, money can’t buy.

It’s the fifth consecutive Be in My Calendar Comp that has been run in conjunction with UKC and it’s proving to be even more popular than ever. The four previous winners have been snapped making some great shapes on some of great routes. Craig Bailey (2012) and Ally Smith (2010) both featured on the fine Llangollen area limestone crags whilst Liam Lonsdale (2011) and Rachael Crewe (2009) were captured at St Bees and Stoney Middleton respectively.

Here’s a quick gallery of the previous winners in action…

YOU need to be an experienced rock climber capable of leading rock routes of V Diff upwards. You must be available late July to early August for the photo shoot and will bring a sac of kit and a mate along to climb with.

Here’s what to do…

Entry to the comp is via the UKC pages. Click through this link and follow the instructions… http://www.ukclimbing.com/articles/page.php?id=4756

Also posted in Be in My Calendar Competition, Climbing, Photography