August’s Edition of Climber is hot off the presses and it comes with a destination piece from yours truly on one of the best single-pitch, seaside trad climbing venues we have in theUK– yeph, I’m talking Lower Sharpnose… 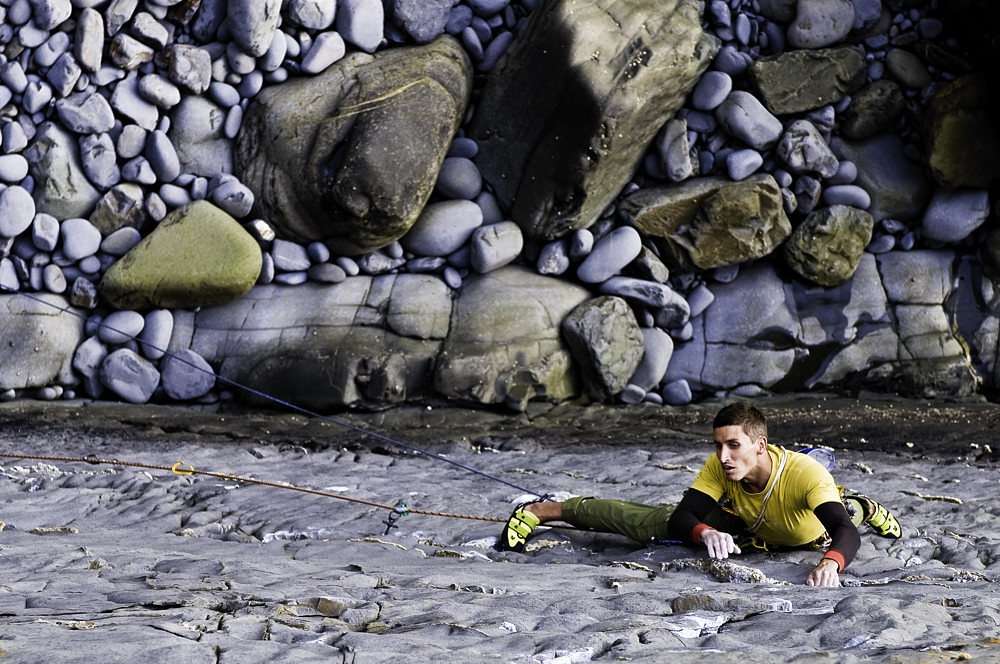 For years I’d blasted down to Cornwall getting, but ignoring, a ‘I should go too Lower Sharpnose’ feeling as I motored past Okehampton on the A30. Eventually, the opportunity came to check-out the Culm Coast for a calendar shoot and Adam, Kev and myself met up last summer and went down there for a weekend. The short walk past the listening post had been superseded – a long walk-in along the coast now being the order of the day. It’s not really a long walk – but it sure felt it carrying both climbing and photography kit. High tide that weekend was at noon so a late start – followed inevitable with a late finish – was imposed upon us. It did afford a lie-in so it wasn’t entirely disagreeable and we did (just) make last orders at the pub as well so again, that wasn’t a total disaster.

Over the years I’ve sometimes found that crags that are hyped-up don’t always quite live up to expectations – not so Lower Sharpnose however; the crag is truly unique and the climbing to die for. Well maybe not quite, but it is pretty flippin’ good. Lower Sharpnose isn’t especially big – quite small in fact – but IMHO it’s a package that hangs together very well indeed.

But there I go starting to give you the full SP. If you want the full low-down at the moment you’ll have to pick up a copy of the mag. Here’s a gallery of images to whet your appetite…

There’s now less than 24hours left to enter the ‘Be in My 2013 Calendar Competition’ so if you fancy being in with a chance at a money can’t buy prize then you’d better be flippin’ quick!

If you’re not familiar with the competition, UKClimbing, alongside some of the biggest names in the UK climbing business, are sponsoring a page in my UK-centric climbing calendar, Climbing:2013, and I’m looking for a keen climber to be photographed in a special photo shoot for the UKC page. It is a prize that, as copy writers would say, money can’t buy.

It’s the fifth consecutive Be in My Calendar Comp that has been run in conjunction with UKC and it’s proving to be even more popular than ever. The four previous winners have been snapped making some great shapes on some of great routes. Craig Bailey (2012) and Ally Smith (2010) both featured on the fine Llangollen area limestone crags whilst Liam Lonsdale (2011) and Rachael Crewe (2009) were captured at St Bees and Stoney Middleton respectively.

Here’s a quick gallery of the previous winners in action…

YOU need to be an experienced rock climber capable of leading rock routes of V Diff upwards. You must be available late July to early August for the photo shoot and will bring a sac of kit and a mate along to climb with.

Here’s what to do…

Entry to the comp is via the UKC pages. Click through this link and follow the instructions… http://www.ukclimbing.com/articles/page.php?id=4756

Posted in Be in My Calendar Competition, Climbing, KSP Publications, Photography

Far from being somewhere between a damp squib and a total wash-out, the British Bouldering Championships over the weekend in Sheffield produced some thrilling climbing. Sadly, the near biblical rain which poured down last week forced Sheffield City Council to pull the plug (sic…) on Cliffhanger 2012 at the eleventh hour on Thursday, the day before the gates to Graves Park were due to open for the weekend. Thanks to Twitter and Facebook the word got out very fast but the ‘Cancelled’ notices posted over the Cliffhanger hoardings around the city made very despondent viewing for many of the Sheffield residents who have really gotten behind Cliffhanger as an event in recent years.

Being British must count for something though and despite reports earlier in the week of water pouring through the marquee and running down the bouldering wall whilst the setters were hard at work the bouldering comp survived the deluge – just. Come Saturday morning the Senior and IFSC Junior competitors arrived for isolation – under stormy skies of course! Recent Cliffhanger events had featured international World Cup bouldering events but the comp this year was strictly a home-grown affair with the British Bouldering Championships riding on the event. And given the circumstances, perhaps it was just as well.

Following the well-contested Qualifiers, which saw all the usual names get beyond the cut-off, it all came down to the four problems in the finals. The 2011 Champs Ned Feehally and Shauna Coxsey were not only through to the finals  but led their respective packs. Could they retain their titles? As usual the setters had concocted a wicked mix of problems to catch the competitors out – more slopers and volumes than ever it seemed; the simple crimp all but banished to the spare holds bin behind the wall. Two of the women’s problems took gnarly groove-lines as well. 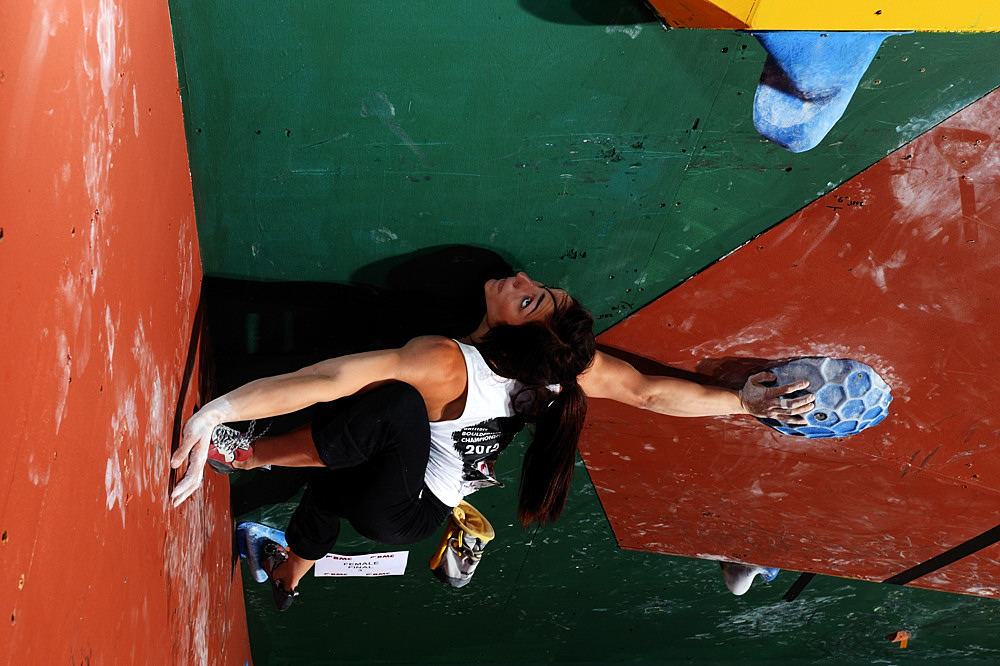 As if the problems weren’t hard enough, further difficulties lay ahead for the would-be champions as head-setter, Percy Bishton, ditched his cordless impact driver for a cordless radio mic and started barracking competitors in a double-act with the official MC, Ian Smith, who valently battled the BBM (Bishton Banter Machine) all afternoon to keep the loyal crowd up to speed with the action and the whole ship on an even keel.

Whilst the male Senior Quals were especially tight, with no less than four climbers coming in joint second, the finals were real close. Gaz Parry, ex Spain, turned in a very creditable performance to come in 5th. The 2011 champ, Ned Feehally, couldn’t quite match his previous form and slipped to 4th. Messrs James Garden and Adam Watson equalled Ned’s number of top-outs of three but took fewer attempts and pulled 3rd and 2nd respectively leaving the power-house that is Dave Barrens to take top slot with successful attempts on all four problems. IRSC Male Junior’s were Nathan Phillips (1st), Luke Tilley (2nd) and Ben Norman (3rd).

The female Senior Quals by comparison produced a nice spread of positions with no ties – a setters dream. Likewise the problems in the finals split the leaders across the board as well. Sheffield’s own ladies, Katy Whittaker, Diane Merrick and Mina Leslie-Wujastik (placed 6th, 5th and 4th respectively) couldn’t quite muster the power and athleticism that Leah Crane (3rd) nor Alex Puccio (2nd) brought to the boards. However, it was Shauna Coxsey that topped the table with a maximum of four tops to maintain her current good form and scoop the top place for the second year running. IFSC Female Junior’s were Shauna Coxsey (1st), Charlotte Garden (2nd) and Jennifer Wood (3rd).

Paradoxically, Sunday saw another day of OK weather for the IFSC Youth Categories comp which was well-attended and well-contested. For a full breakdown of the result s see the BMC website http://www.thebmc.co.uk/british-bouldering-championships-2012–results.

July 6th: Is there any dry rock out there?

As one of the wettest June’s ever fades it looks as though July is taking straight over. Question is, is there any dry rock out there?