I remember the magazine images clearly. They conveyed an urban, gritty feel to the climbing which looked distinctly esoteric – a locals’ local, albeit with some gnarly testpieces. Over the years I’d never been to the crag nor had I ever spoken to anyone else who has climbed there – or, perhaps more accurately, I’ve never spoken to anyone who wanted to admit they’d climbed there! Thirty odd years had passed since the magazine article and I’d all but forgotten about it then, flicking though Grimer’s Boulder Britain guide, there it was on page 184 and less than a mile from where the in-laws lived! “Yeah, we used to climb on Granny Rock as kids” said my wife to my surprise. I added it to the list of places to check-out – at some point…

My opportunity came yesterday on Easter Sunday. I think that Easter is a great time to grab a power top-up and Fontainebleau (where else) would head my list of venues – given the choice. It’s fair to say that The Breck would be a good deal lower down my list. However,  as we’d pitched-up on The Wirral at the in-laws it was either travel and go indoors or nip down to The Breck. I had little more than an hour or so to spare so it wasn’t a hard decision – The Breck it was.

Grimer’s intro is classic: “The holy grail of graffiti and urban chic with highball crimping and ghosts of old heroes”. The sun was shining and the bluebells were out and it seemed a tad surreal almost – a climbing retreat amidst such domesticity. Situation wise, I couldn’t help but draw parallels with Sissy Crag in Sydney – but let’s stop right there! The delightfully named Bluebell Wall seemed the obvious place to start. Think Burbage North size-wise but add a concrete topping and then some railings immediately behind. Warming-up was interesting; Bluebell Crack, Fagan and Melancholy all seemed about the same grade despite being 4+, 4+ and 6a respectively. They were high too – this was real old skool bouldering especially as I was travelling light and was sans pad! The final twist was that you either had to down-climb the problem or traverse along the top and then drop-down an easier problem; good for the head and a bit extra mileage!

Just opposite, Granny Rock looked tempting – and lowball! The blocky front face was covered in easy ledges but the back-side had a handful of problems including a couple of traverses and some pretty impressive graffiti! It seemed an unlikely place for some quality climbing but all four blocs give just that – Positron Traverse at 6b stood out. Amongst the graffiti I spotted a collection of shabby pockets leading from the middle of the wall to the left arête. It’s an entertaining little link and it soaked up all my remaining time. I couldn’t leave though, and nor should anyone else visiting for the first time, without nipping over and have a look at Overhanging Wall – home to Al Rouse’s Direct 7b+ and Steve Haston’s Dyno 7c+. Both looked good, shockingly high and distinctly old skool – a remarkable testament to the standards achieved yonks ago. Grimer’s descriptions were bang on the money.

Visits to the in-laws will never be the same again!

Despite having lived within a stone’s throw of the Peak for coming up forty years now it never fails to take my breath away with what an awesome place it is! Sunday just gone, was a perfect example – just incredible…

Sheffield was havin’ a bluebird day; a cloudless blue sky day, reasonably calm and peaceful – spring was fully in the air. Not so out in the Peak where there was a full-on hooley blowing. Cyclists were being blown all over the place (I know, I been that zig-zaging cyclist earlier that morning), walkers (these that cared more about their comfort than their cool appearances) had their hoods up and jackets fastened and east-facing (ie sheltered) buttresses seemed to be pulling more climbers than usual. 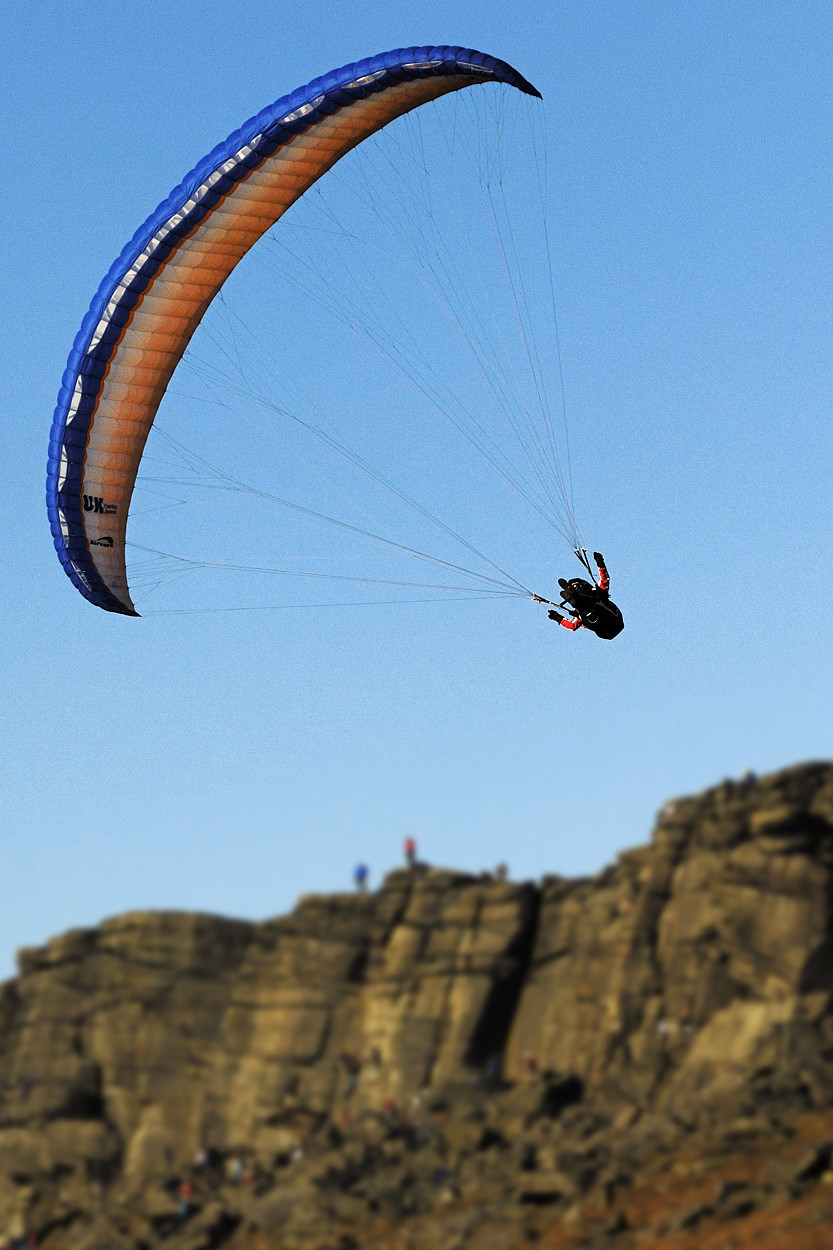 Frustratingly, and despite it being an absolute drop-dead gorgeous day, there was not much action going down and – not understandably – zilch activity upstairs. Simply there was nowt to shoot – so I didn’t! Boo hoo. Last night though I was doing some work on my photo archive and came across a bunch of pixs that I’d shot a couple of years back on a similar (but sans wind) day that had been sitting (quietly) on my hard drives ever since. As I hadn’t captured anything yesterday I thought I’d share the pixs from the archive. They make the point though that the Peak really is an awesome place – on every level!

‘Discovering’ these shots languishing on my hard drives is a tad embarrassing really hence a metaphorical note to self – “update your portfolios you puppet!”…

Although it’s a tad retrospective now – the last month or so has just disappeared – March’s copy of Climber magazine carried my review of the latest in so-called hands-free (aka head torches) lighting. From the uber Mammut X-Sun (a 950 lumen monster) through to the delimitative Petzl e+Lite (a 25 lumen emergency unit) there really is a headtorch for every occasion…

Without a doubt, headtorches are an essential part of climbers’ kit-bags. Today, cheap headtorches are sold in main stream supermarkets from as little as a fiver a pop whilst the specialised shops sell the top-end units costing anything up to £250 quid. They’re used for all manner of activities – anything from dog-walking to emergency services through to elite athletes for climbing or other extreme sports. As power and functionality vary, so does size and cost. The review covered fifteen different units as well as giving the low-down on the plethora of batteries and LED types currently in use. If you don’t want to be left in the dark (I know – crap pun…) then check the review out.

Incidentally, as part of the review I dug-out my old Petzl Zoom headtorch from the bottom of the wardrobe and compared it with the X-Sun and the e+Lite (mentioned above). The results show quite plainly exactly what the R&D departments have achieved in the 30 odd years since Petzl first brought their legendary Zoom to market. Take a look for yourself at the pixs below and the difference is obvious. For the geeks amongst us, the e+Lite delivers the same (25 Lumen) output as the Zoom albeit at a fraction of the size/weight whilst the X-Sun knocks out over whooping 38 times more light than the Zoom.  The times sure are a changing…

And here’s a shot of the X-Sun and the e+Lite alongside the old past master, the Zoom… 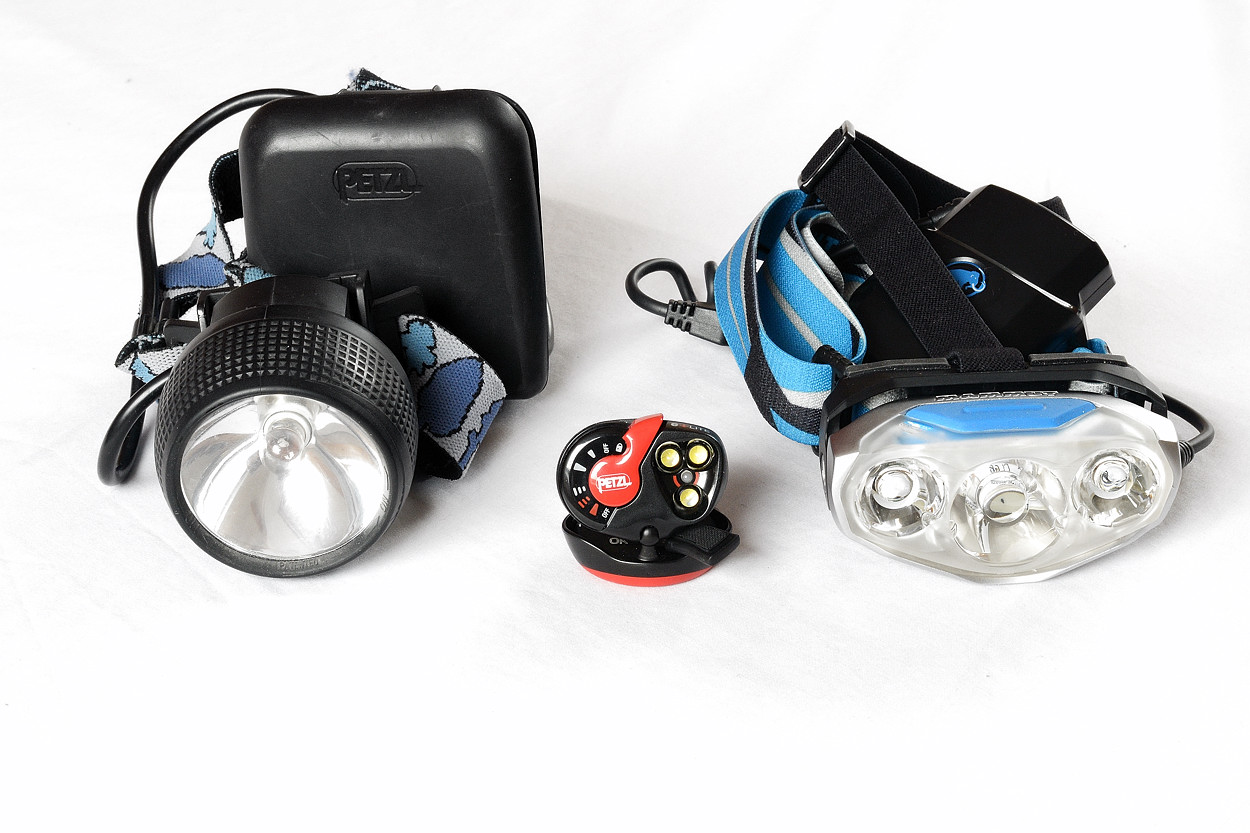