Most of the time, most climbers visiting Chulilla agree with the premise that it’s Valencia’s best crag and an undisputed WCD (World Climbing Destination). This winter however, Chulilla hasn’t quite delivered.

Locals say that it’s been the worst winter for 35 years; the un-uncharacteristically heavy rain has almost, quite literally, washed some of Chulilla’s reputation away. Depending exactly when visiting climbers have dipped their toes into Chulilla’s rocky pool, they may have escaped the worst of the rains and hence had a typically Chulilla visit during which they have quenching their thirst for endless routes. Others – myself included – have not been so fortunate. Arriving in late January, we were greeted by dripping wet walls and tufas rather than the normal curtains of immaculate rock.  It’s not solely Chulilla that’s been affected either; the Costa Blanca and Costa Durada have been hit too. Latterly, those confining their activities to more northerly venues – such as in the Lleida area – have apparently fared better. 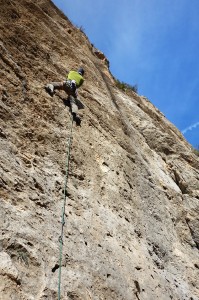 Try Gasolinera at Fantasia if you fancy some old skool action

The roller coaster kicked off in late December/early January by all accounts. Firstly, it was dry, then soaked, then it nearly dried but then it rained again and got proper wet. By late January the contrast with last year couldn’t have been greater. The only decision last January was whether to climb in the sun or the shade. This year, the shady crags – barring a few – were drenched so it was in the sun or (almost) nothing. Pared de Enfrente and Chorreras – normally thronged with climbers – were deserted; it wasn’t that there was the odd wet hold here and there rather that whole swathes of the crags were gushing wet. Early in our visit we walked – well, actually we ran – beneath Chorreras; it was flowing like a river drenching us in seconds! Pared de Entrente wasn’t quite as bad but soaked nevertheless. Locals say that it’ll be April before these badly affected areas are dry again!

The flipside of the coin was that Muro de las Lamentaciones, Nanapark, Ca Germa and Naranjito were pretty much bone-dry. Teams flocked to these areas either arriving early or late depending on team preferences to climbing in the sun. Most of the other popular crags such as Sex-Shop, El Balcon, El Balconcito, El Algarrobo and El Oasis were in decidedly poor condition too. New sectors such as Serengueti and Masters proved ‘pretty dry’ and so along with old skool crags such as Competition, Ceguera, Peneta I and Peneta II were climbable. Outside the gorge, other old skool and sunny crags such as Pesadilla and Fantasia were dry.

Bar the rainy day, the weather was pretty amazing; stunning blue skies being typical. Most days we thought we could see vultures high above the crags whilst Alpine Accentors and Robins were frequent crag visitors. The cacti in the valley also appeared to be flourishing.

Whilst we were decidedly impacted where we could go and climb, save for a single (forecast) wet day we climbed six days from seven. We bagged numerous multi-starred classics and had a fantastic time despite the wet and hence off-limit crags. Sometimes, you just have to ‘get on with it’. Oh, by the way, if slabby walls are your bag, then have a crack at Gasolinera L1 and L2 at Fantasia and see how you like them. They’re given F6b and F6b+ in one guide and F6b+ and F6c in another but we figured those are still a fair bit shy of the proper grades. 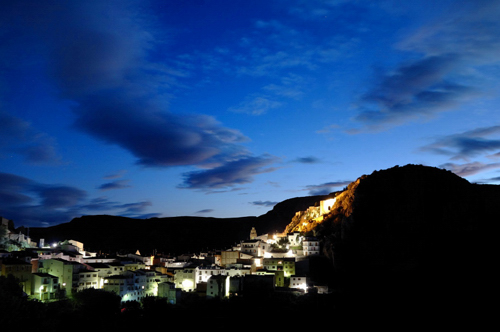 One last thing Pedro Pons, who runs the guesthouse just on the (northern) outskirts of Chulilla, has recently published a revised guide (c.22 Euros) to the climbing at Chulilla. Pon’s guide is available locally and it supports the bolting effort at Chulilla. Unfortunately, this isn’t currently available in the UK.