It dawned, as forecast, a windless blue-bird day – perfect for a Gylder’s Round. We arrived just after 9am at the Pen-y-Pass to a full car-park so the decision was made for us; park at Pen-y-Gwryd and take the Miner’s Track up Glyder Fach, scamper over to Glyder Fawr and then drop down the so-called red dot route down the South Ridge and be back at Pen-y-Pass for a pint before getting off home. All it needed was a volunteer to nip down to the Pen-y-Grwyd to pick up the wheels. It wasn’t discussed, but I had a feeling I knew who would be getting that job! 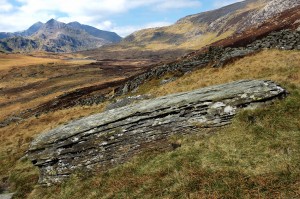 Snowdon from the Miner’s Track on Glyder Fach

For those with Classic Walks from what was Diadem Books, the Glyders from Pen-y-Gwryd is route #63 as described by Showell Styles. Viewed from the south, the Glyders aren’t especially inspiring – surprisingly uninspiring in fact. Gylder Fawr at 3278ft or 999m is the taller of the two, just pipping Glyder Fach at 3261ft or 994m. The southern slopes of both are rounded and convex and arguable rather dull because of it. The northern slopes are the opposite however; massively concave giving steep headwalls above their respective approach cwms. Tryfan lies to the north of the Glyders as well and the classic walk from the Ogwen Valley starts up Tryfan, then drops down in a col and then up Bristly Ridge to Glyder Fach. The usual descent back to Ogwen is down Y Gribin. Whilst the Glyder Round from Pen-y-Gwryd sounds less inspiring it does afford absolutely fantastic views of Snowdon to the southwest. 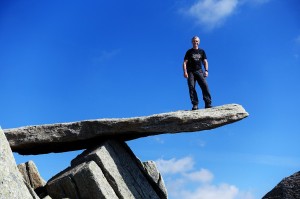 We weren’t especially quick – in fact we were a good couple of hours longer than the ‘book’ time of five hours for the round. The view of Snowdon was as good as it was said to be as were the views to the north towards Tryfan – so much so that the Trwfan-Bristly Ridge-Glyder Fach-Y Gribin round has been added to the list of must-do’s. And whilst the approaches to the top of the Glyder’s wasn’t anything to write home about, the summits themselves were quite impressive. Dropping off Glyder Fawr to locate the start of the red-dot route down the South Ridge isn’t especially easy even in good visibility – it would be pretty difficult in bad weather I’d have thought. Like many others I don’t really agree with the use of red paint to way-mark the descent but I have to say it’s very useful! Without the reassurance of the red dots it would be a baffling descent – and a much boggy one too.

Here’s a few shots from the day – hope you enjoy…

This entry was posted in Photography, Walking.