So, Rock Shoes were Part II of the gear reviews I’ve just done for the May edition of Climber magazine. There’s a huge number of rock shoes on the current market and there’s more coming to market virtually every day. Not surprisingly, it’s a minefield; lace-ups, velcros and slippers as well as low volume/narrow fit to high volume/wide fitting

It wasn’t always thus though as anyone who has been climbing a while will tell you. PAs (named after Pierre Allain), EBs (named after Eduard Bourdineau), RDs (named after Rene Desmaison) and Kletts (short for Kletterschuhe) were the only choices back in the Seventies. The revolution came in the early Eighties when Mr Moffatt rocked-up with a pair of Boreal Fires, the first boots to have sticky rubber. Moffatt, ever the competitor, pressed home his advantage by punching out the first ascent of Master’s Wall on Cloggy. In line with the style of the day, Moffatt wore white baseball socks in his Fires. How times have changed!

Although Boreal stole the show with their Fires, other manufacturers were soon on the case and thus began the never ending stream of new shoes we have on the market today. Exactly what we might choose to wear today is usually dictated by need – be that performance (cruising or high grade), comfort (single pitch or multi pitch), foot shape (low volume/narrow fit or high volume/wide fit) or purpose (ie smearing, edging, crack climbing, pocket pulling or even competition/indoor or outdoor climbing). Many climbers have different shoes for different purposes. Others though, prefer a simpler life and opt for a one-shoe solution for all their climbing.

For those that are curious about such things, the testing team was one of the biggest teams yet involved on the programme – it had to be given the variation in the fitting of the rock shoes. On more than one occasion we found that a particular shoe didn’t suit one tester but for another it was a marriage made in heaven! Between the team we tested/reviewed the following shoes: 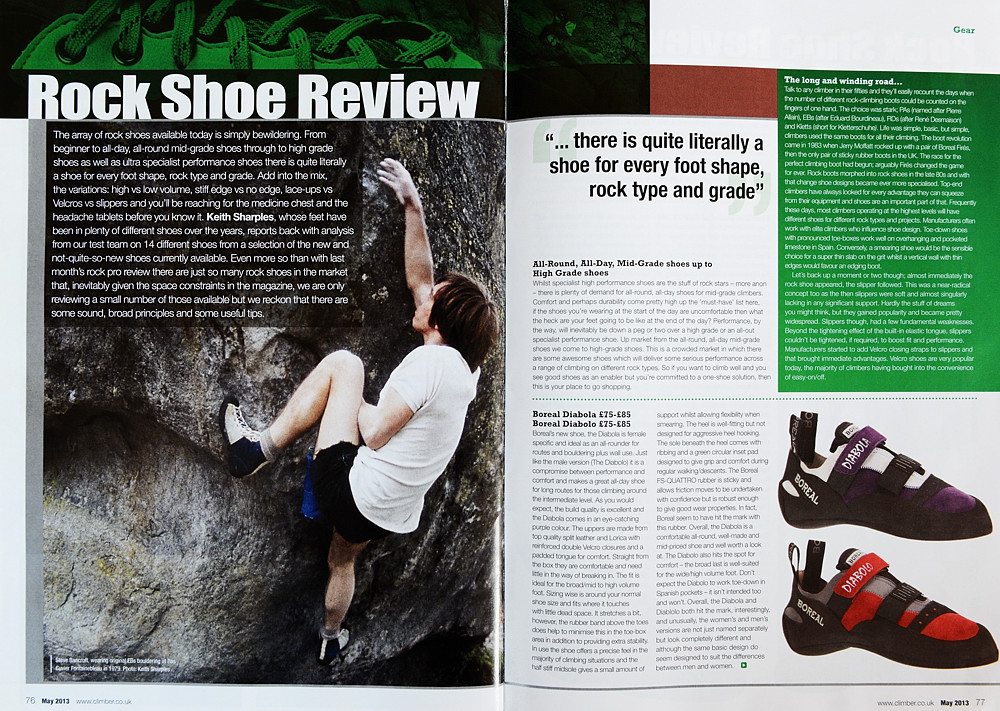 This entry was posted in Reviews.