UKClimbing users have some pretty wacky user names don’t they? The winner of the ‘Be in my Calendar’ competition for 2012 – and hence appearing in Climbing 2013 – is Belay Bunny Turned Bad which as to be one of the most intriguing user names…

The fifth ‘Be in my Calendar’ Competition went live on the golden gates that is the UKC portal over the summer and the replies rolled-in immediately. If I ever get a spare moment (note to self – make it happen man…) I’ll do the maths but until then my gut reaction is that the ‘Be in my Calendar’ competition entrants seem to reflect the broad church that we know is climbing. Some of the comp entrants were into hard trad, sport and bouldering whilst others clearly take their rock at a more leisurely level. Some are new to climbing and others are old hands; some live within spitting distance of theUK’s best climbing and others live in the flat, urban waste-lands. Some clearly love the hustle and bustle of thePenninesand others gravitate towards the quieter locales; some are students and others are doctors and headmasters. As I say, a broad spread. User names though vary enormously though from the simple/straight right through to the crazy with bizarre somewhere in there in the mid-ground of the mix which brings me back to this year’s comp winner.

So, without further ado, this year’s ‘Be in my Calendar’ Comp winner, Belay Bunny Turned Bad, is actually Becky Lounds. The three runners-up which get a copy of the calendar each are Jason Wood, Steve McIntosh and Jan Bella. And to the rest of the comp entrants go my sincerely thanks for getting involved – I’m sorry but I couldn’t include you in the calendar this year – there’s always next year!

The winner duly identified, it was then onto sorting out when and where to do the photo shoot. You don’t need me to tell you how lousy the weather has been this year so I won’t; what I will say though is that I’ve had to look pretty carefully at the venues for the calendar shoots for Climbing 2013. I’ve always taken the view that, wherever possible, I want to shoot and produce the calendar in-year to keep the images as fresh and topical as possible. However, when it dumps all year I suffer – big-time! Second note to self – re-visit the in-year strategy going forward. Featured climbs don’t have to be super hard but I am looking for them to have either striking photographic features or be in special locations as well as offering great climbing. Easy access is always nice, but quick-drying was added to the list this year as critical. Talking venues with Becky we figured slate would be a distinct possibility but we agreed to meet up in Llanberis in late July and take it from there.

When prep’ing for a shoot I normally flick though the local guides so ahead of my Llanberis shoot with Becky I pulled the Paul Williams 1987 Llanberis guide off the shelf and started turning pages. Starting with William’s introduction, I then jumped to the first ascent lists then back to the guide proper for a blast over a bunch of route descriptions. Although I’d been around at the time slate development really fired off properly in the early 80’s I’d never fully appreciated just how rapid the slate routes had been banged out by the then activists nor how significant slate was in comparison with the climbing in The Pass. The stats are actually quite staggering. Based on Williams ’87 guide, the slate routes accounted for 63 pages whilst the trad climbs in The Pass filled up a further 162. The real significance of this fact doesn’t become obvious until you compare the timelines. The first trad climbs inLlanberisPassdated back to 1879 but the first slate route wasn’t done until 1964. The first two decades on slate were real slow – just two routes in total! However, come 1981 the slateheads got stuck-in big style and in the six years until Williams guide was published in 1987 they literally punched out dozens/hundreds of routes each year. By the time the guide hit the shelves slate accounted for roughly 1 in 4 routes in the area. What is even more impressive was that slate gave the first E7 (Raped by Affection) in the area in 1984 and then the first E8 (Quarryman) in 1986.

I’d never looked at the slate development in quite that way before. It was hard not to be impressed by the stats and I felt inspired to shoot something in the slate quarries as a result. That said, I ought to fess-up at this point and say that climbing on the slate has never really floated my boat in the way that other rock has. I’m sure I’m not alone in this but I’m quickly out of my comfort zone when I’ve got to pad up slabby rock whilst my gear disappears south. Strangely though, and I do recognise the paradox, but I enjoy photographing slate whether I’m shooting wide to capture a waste-land quarry scene or tight-in to capture some mega feature like a crack splitting an otherwise blank wall or a wicked corner or groove. Photographically, given the right light the texture of the slate can be amazing. Without a doubt the slate quarries are totally different than most places; stark and bleak for sure, but evocative and emotional as well. 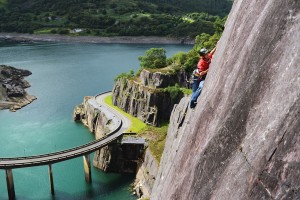 So let’s fast-forward to the morning of the shoot with Becky. I was woken by torrential rain beating down on the roof of Ynys Ettws, the Climbers Club hut sited in the Pass. There wasn’t a decision to be made; we wouldn’t be shooting in The Pass for a good few hours so it was slate or nothing. As is so often the case by the time we’d downed a pint mug of tea in Pete’s Eats the world was starting to look a slightly better place – even the weather was clearing and a flicker of hope was appearing through the gloom. Thirty minutes later still we were toiling up the killer steps heading into the Rainbow Slab intent on capitalising on the quick-drying slate saving the day. Over tea in Pete’s we’d honed in on a few targets the first of which was Pull My Daisy (E2 5c), a 1984 route from Mark Lynden, which takes a line up the left-hand side of the Rainbow Slab. The backdrop for Pull My Daisy out over the lake is quite striking and with the sun hitting random patches of the green hillside it was crying out to be included in the shot. Pull My Daisy was a relatively easy set-up; lean over the top of the Rainbow Slab and fix an ab rope to the lower-off then drop-in. Nice and simple. 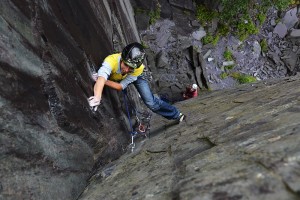 Next up, was German Schoolgirl (E2 5c) – a 1984 route from Martin Crook – which takes a striking corner line up and right of the Rainbow Slab. Photographically this was a bit more challenging and two scenarios seems possible; shot into the corner from one side or the other or shoot straight down. Almost as soon as Becky started climbing it became obvious that it was a ‘facing left’ route and that I needed to be on the left arete shooting into the corner to stand any chance of a getting a decent shot. I thought that abbing down the left arete should have worked but in practice I wasn’t getting the angle I was looking for and when the sun came out from beyond the clouds it was casting my shadow onto the far wall and totally wrecking the shot. In the end I gave up, jugged out and shot straight down the corner instead – the sun disappeared behind yet another bank of clouds as Becky pulled quickly through the top half of the route. 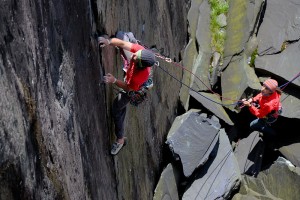 With two routes in the can Tim, Becky’s husband, was keen for a blast up Manatese (E4 6a) which is a great-looking crack round the corner from German Schoolgirl. The sun was out again by the time Tim had racked-up and giving some quite superb side-lighting – it would have been a shame not to shoot Tim as he polished that off. Coiling the ropes after he’d finished the gorgeous afternoon sun signalled an end to our work in the quarries and we succumbing to the siren call to head off up The Pass for some bouldering action for the last few hours of the day. As it was, we kicked-off with the usual – the Roadside Boulders – but then crossed over the road and the stream and spent a wee while on Fear of a Slopey Planet (Font 7a/+) which is an incredible problem and one which I’d never seen anyone on ever. Considering it’s probably one of the best problems of it grade in The Pass it was great way to finish the day off.

By the way, I never did ask Becky what was the story behind her UKC user name – so the mystery remains. Great day out though and some proper nice pixs in the can including another front cover for the calendar. Finally then, here’s a full gallery of images from the day…